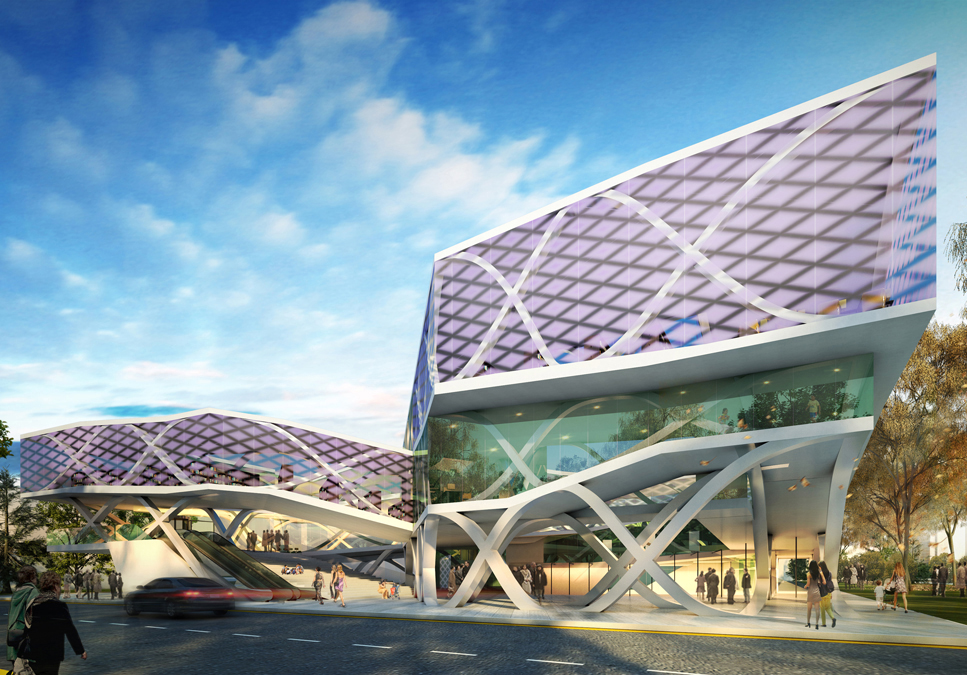 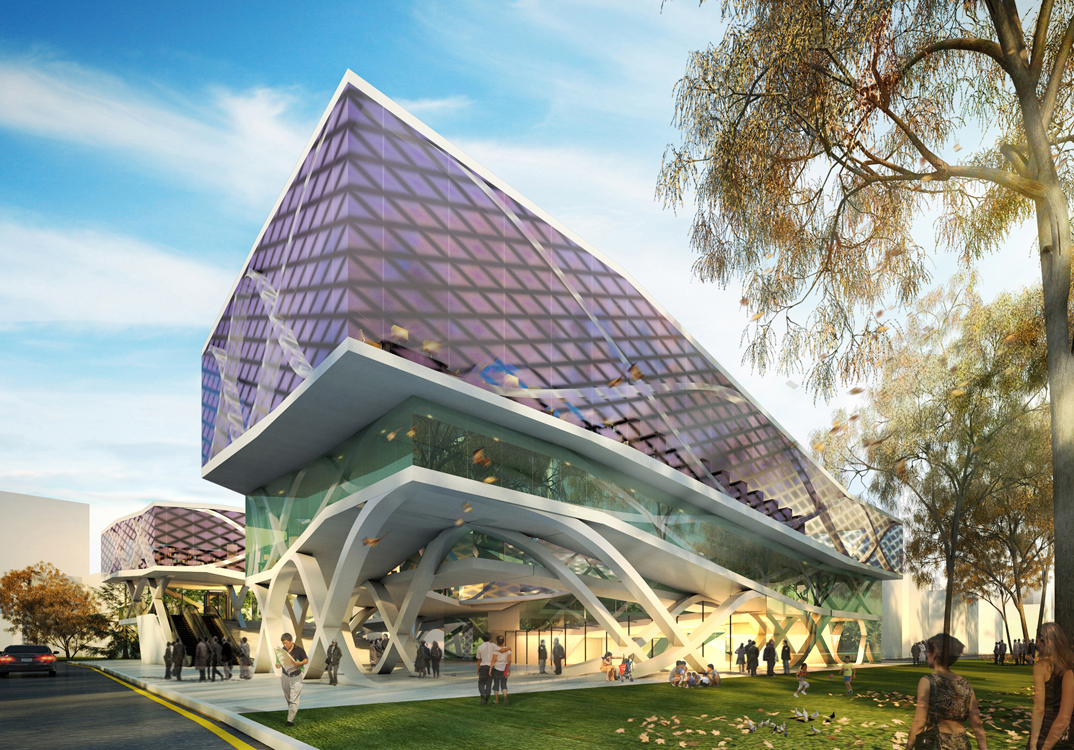 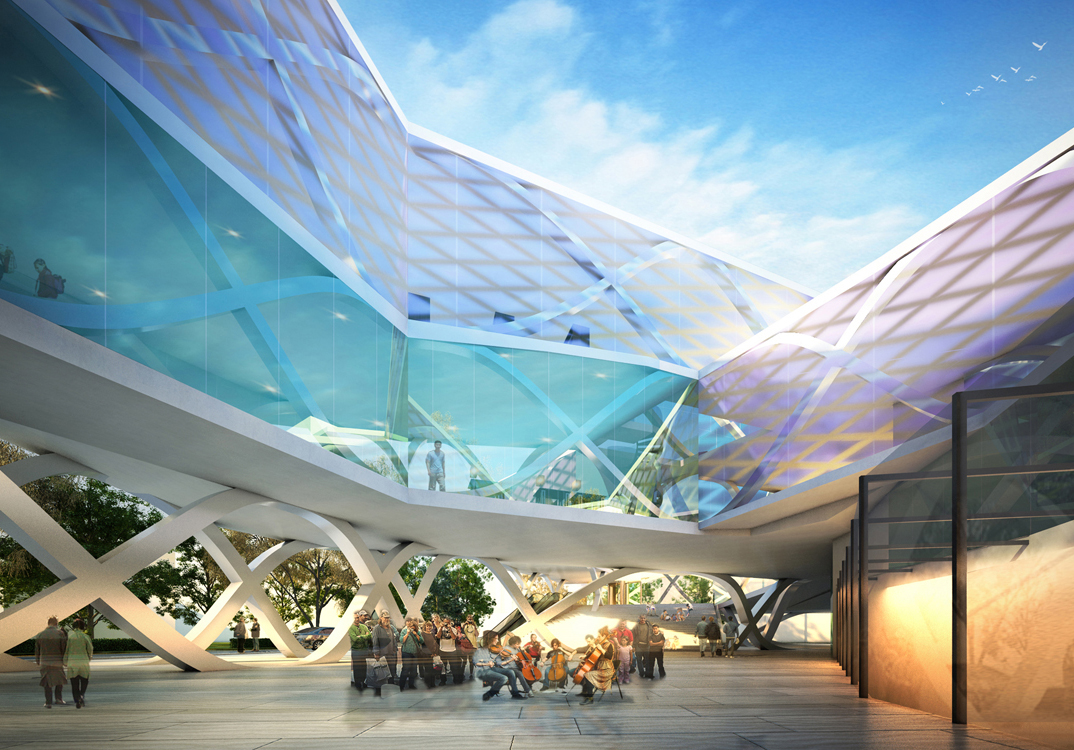 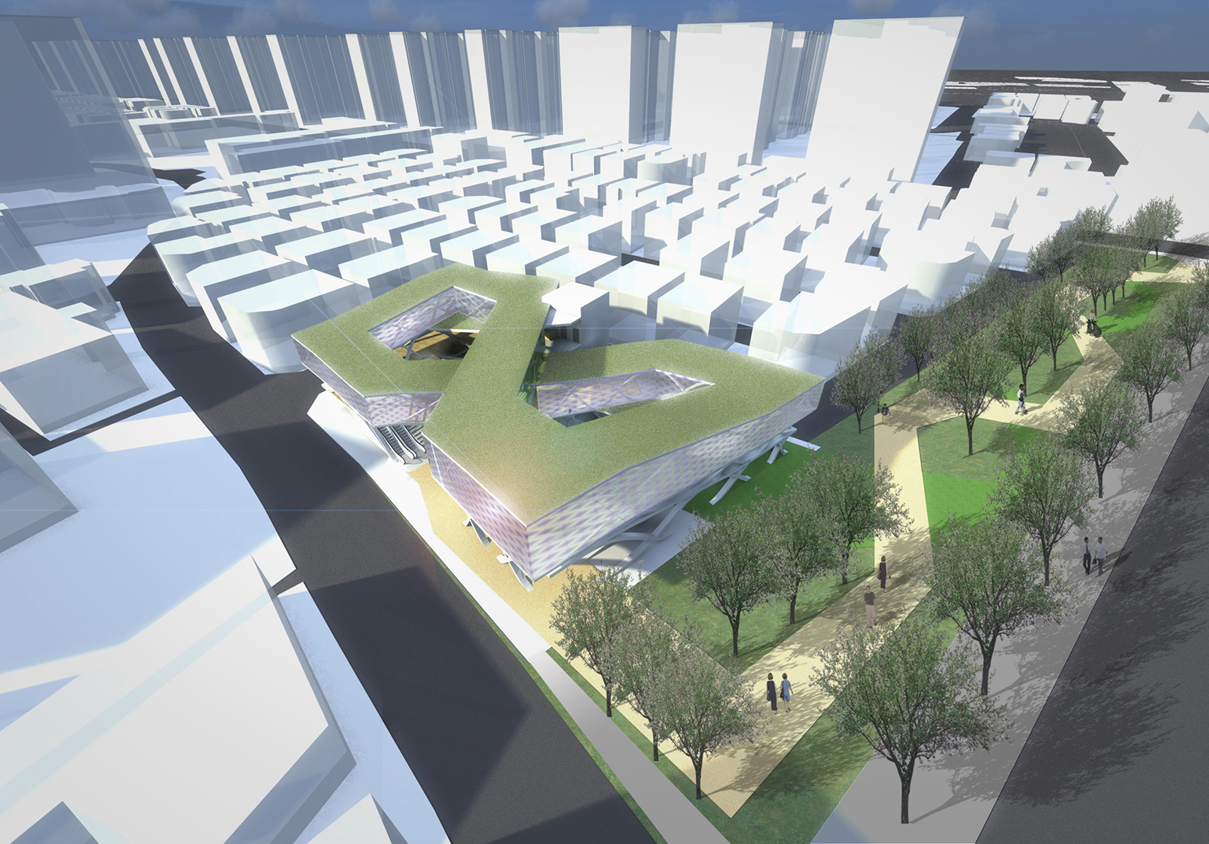 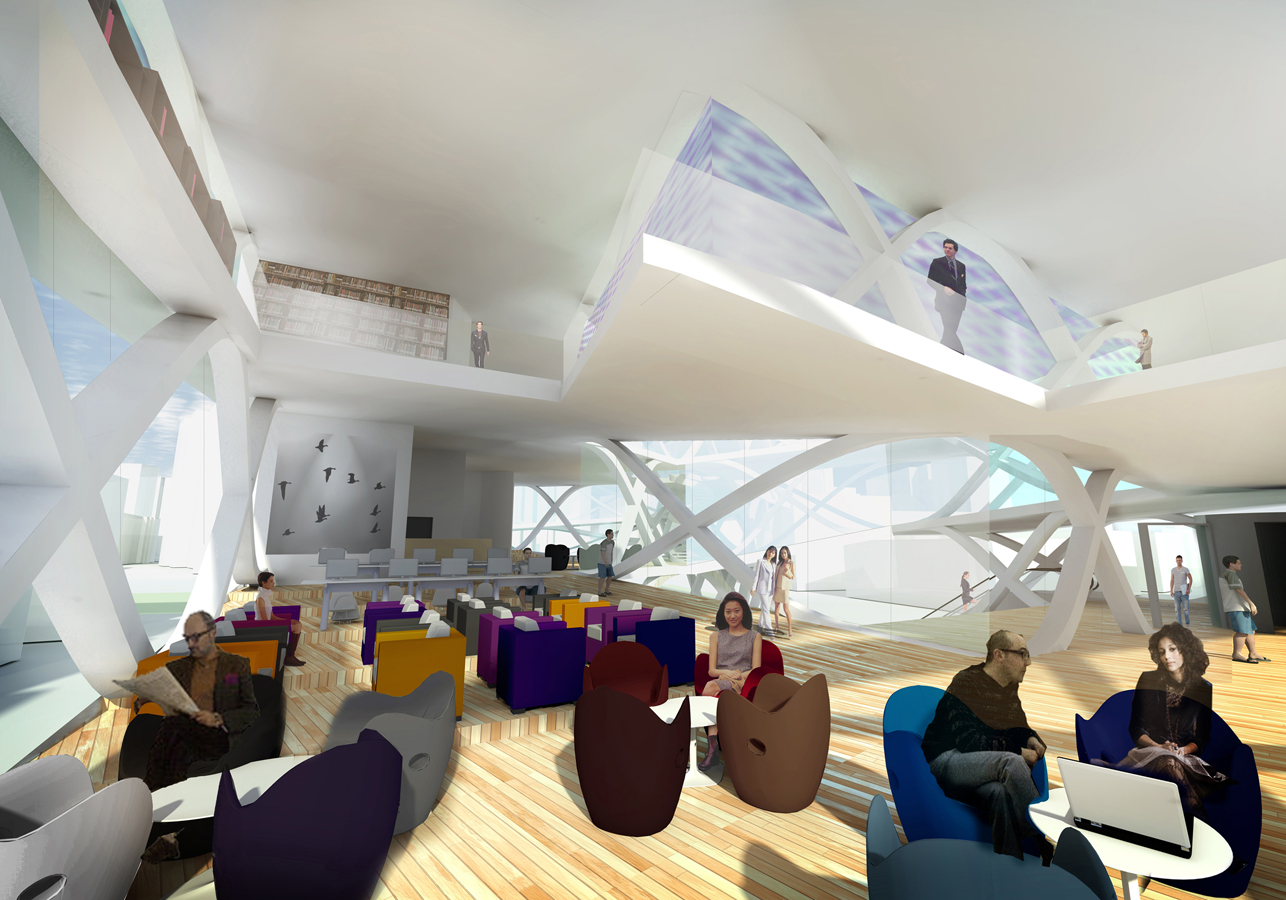 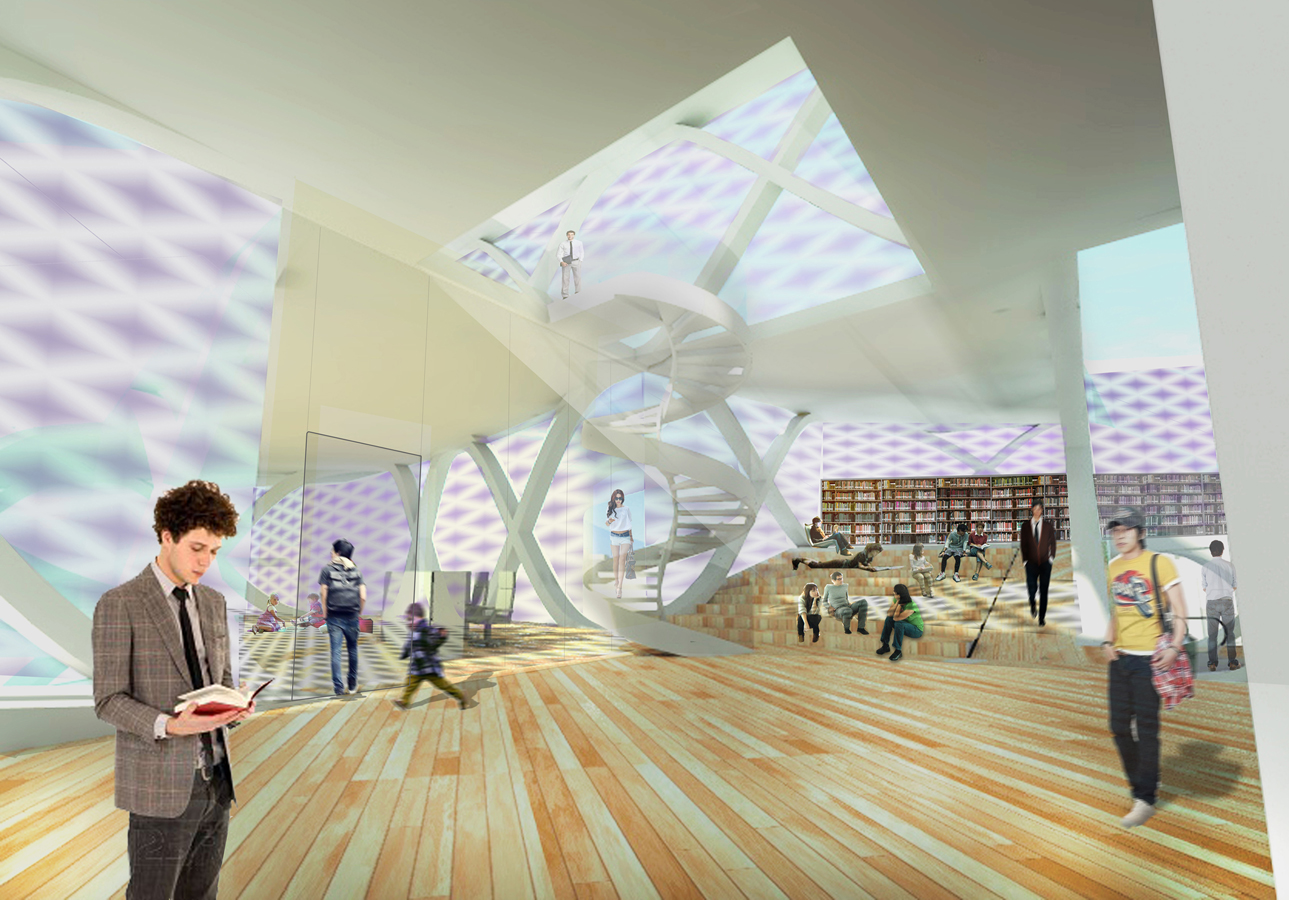 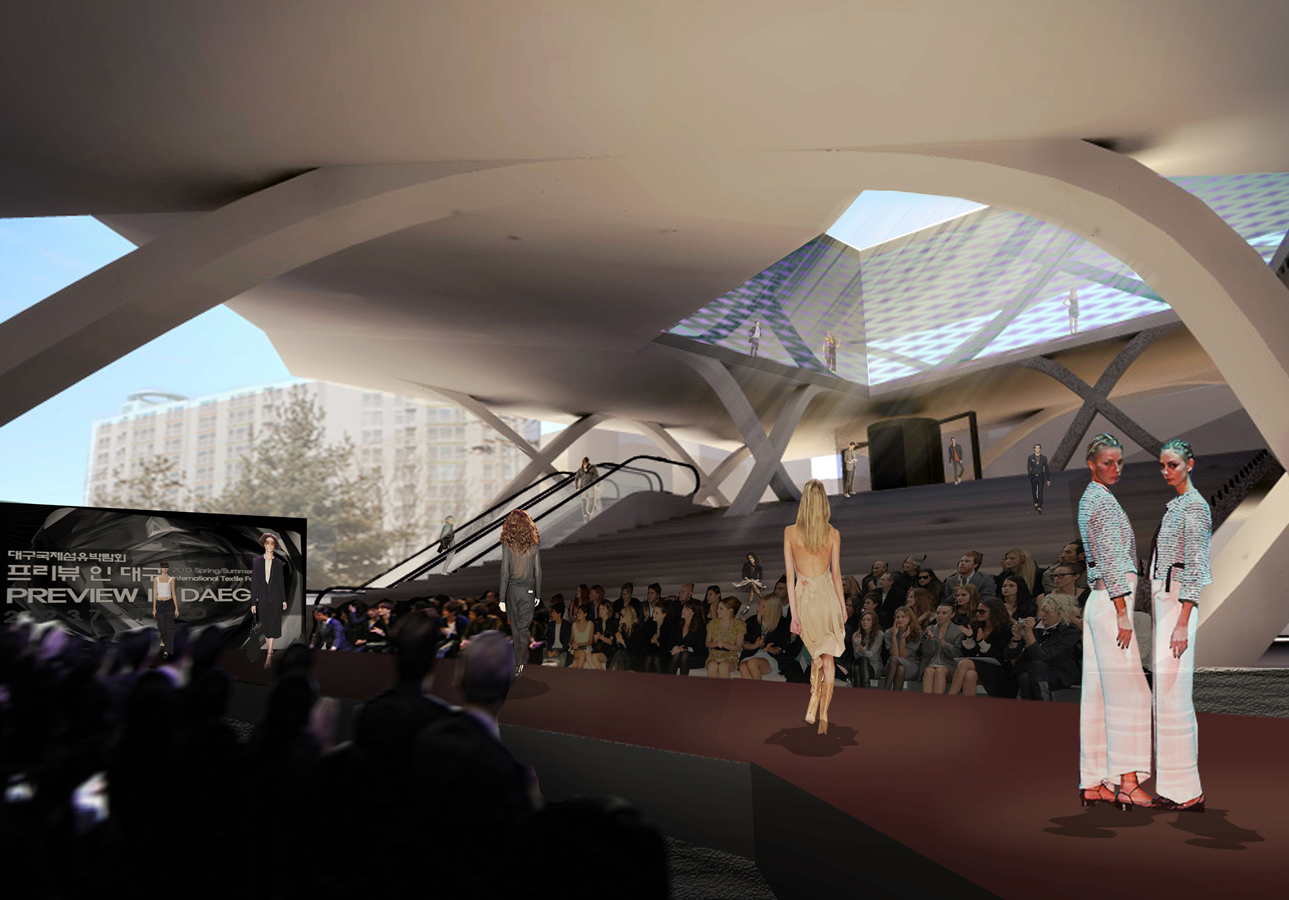 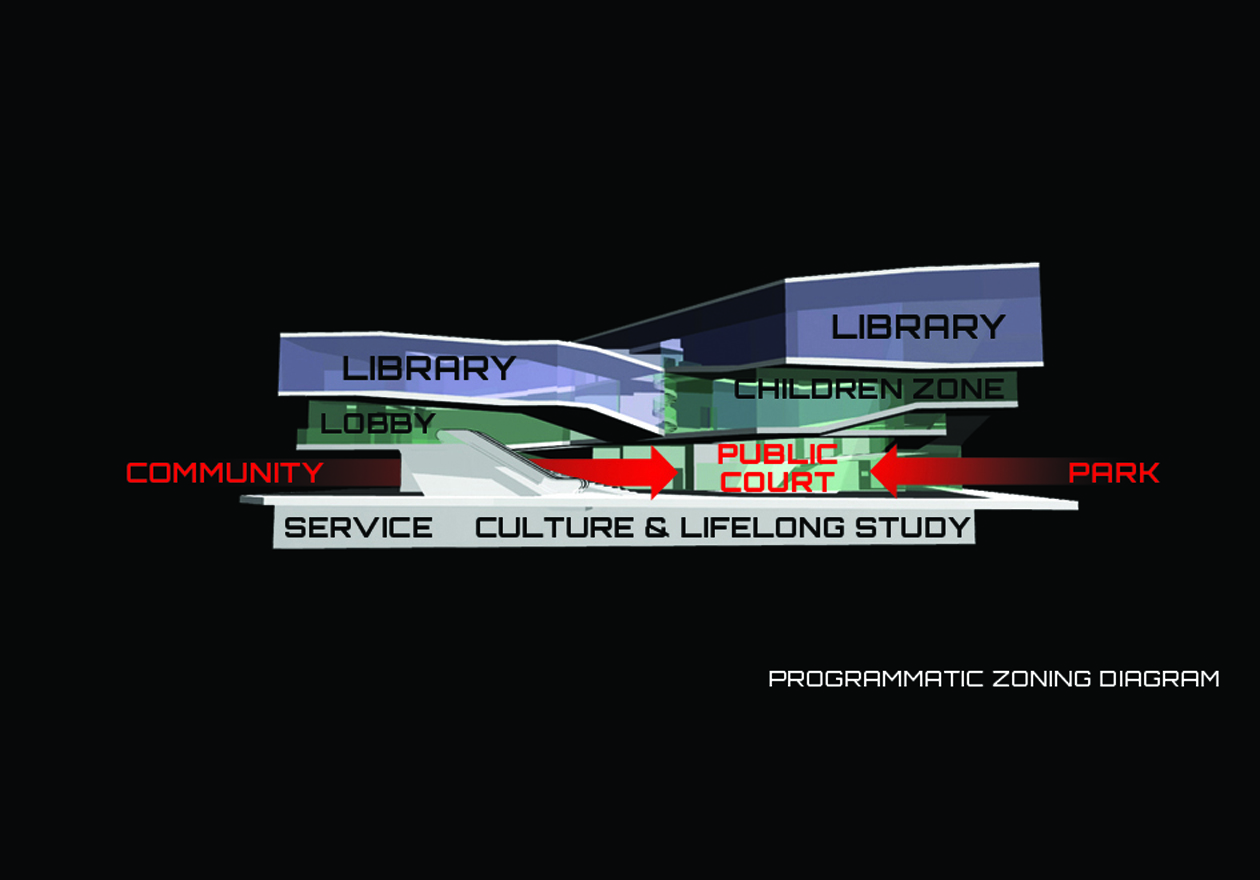 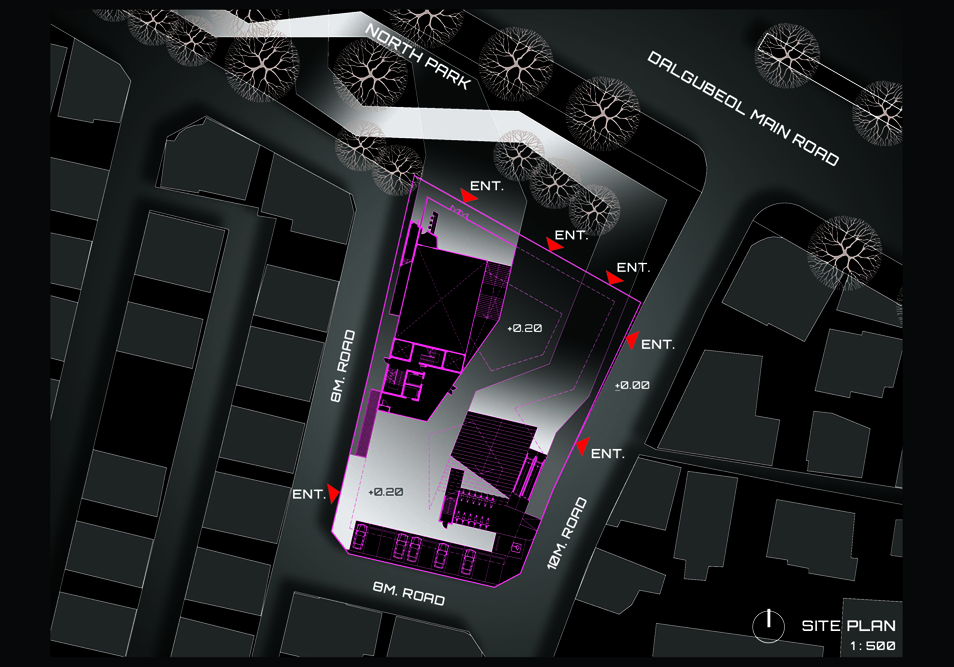 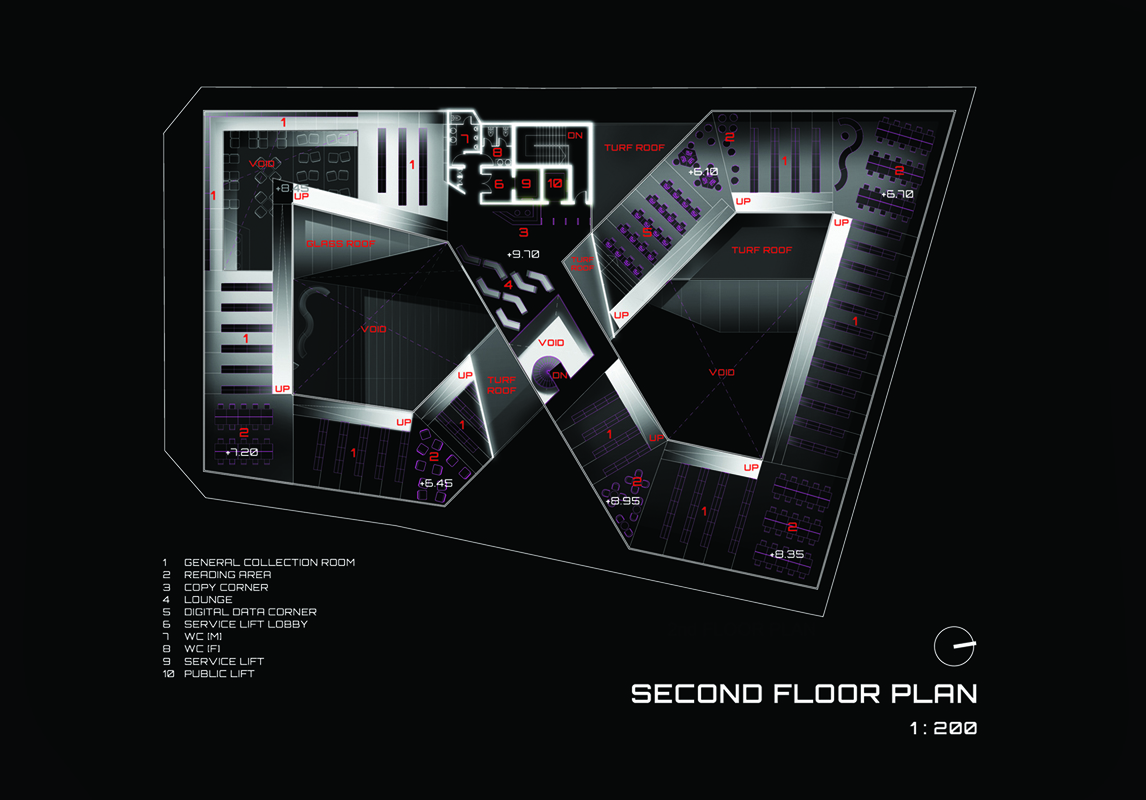 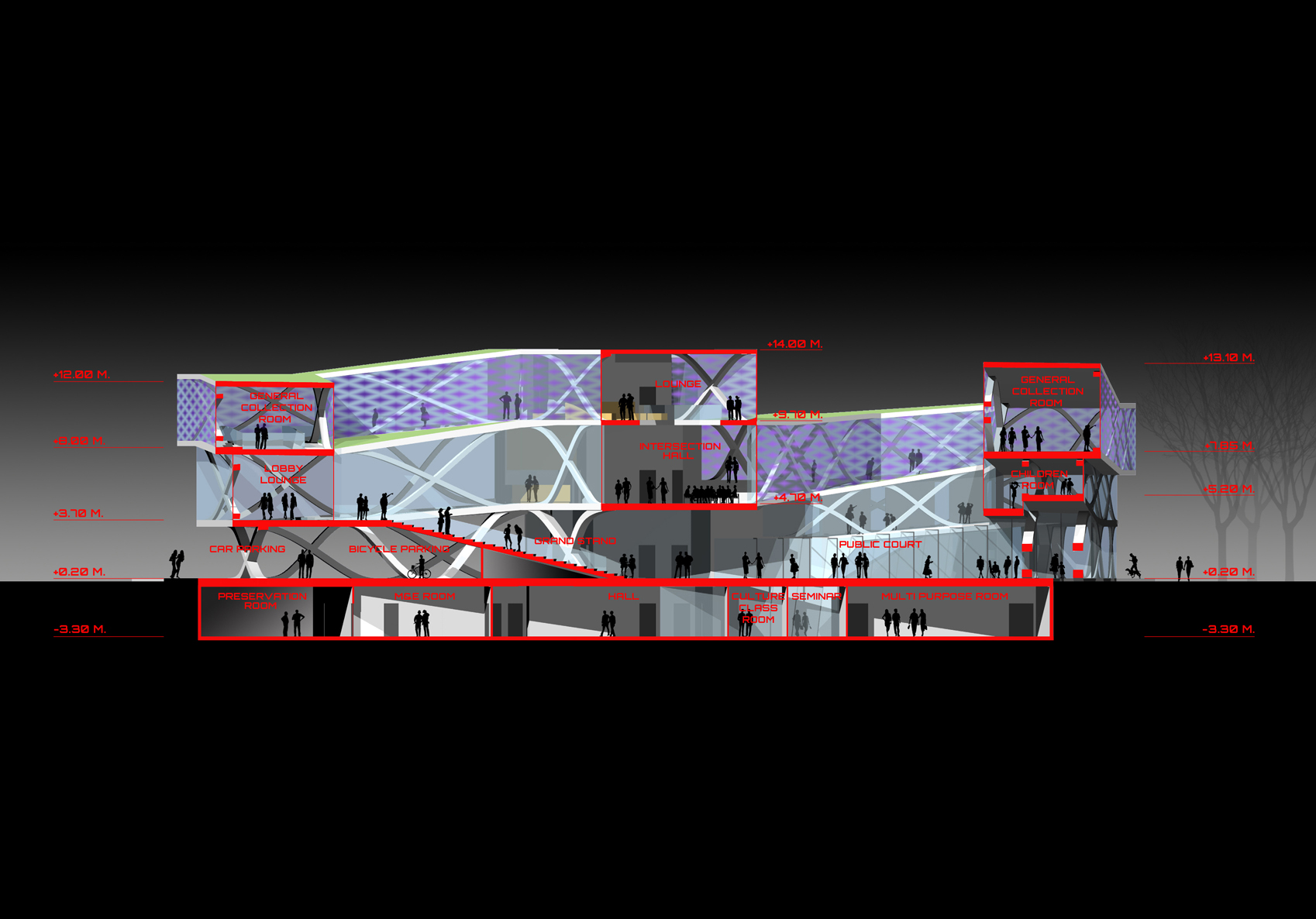 
Role of a new library in the modern city of Daegu

Conventionally, the library is considered as a sanctuary of books where knowledge is kept permanently and inactively; sacred but uneasily accessible. The limited accessibility only for bookworms makes it far apart from today’s society. This notion has even unprecedentedly been challenged by the evolution of the digital era where everyone can reach to the global pool of information from anywhere in the world.

The proposed design of Daegu Gosan Public Library in this complex circumstance aiming to achieve is not only to serve the fundamental practicality of a place where knowledge and various forms of information media are well preserved and openly shared in a more reachable fashion but also to provide a social platform where local and global events in the city can take place in order to reposition itself to be Daegu’s most vibrant and dynamic contemporary venue.

The location of the site is surrounded by pleasant residential and green zones separated from the city center of Daegu. Our proposal makes the most of this advantage by seamlessly blend the internal and external spaces of the library with the urban fabric of the city block and the park in the North side. By lifting main programs (Main Hall, General Collection Room, Children Room) above the street level and also lowering Culture & Lifelong Study and Service Spaces to underground, it extensively allows surrounding urban space to flow through the building’s open courts and also public events held underneath to flow back out to the context. The courts then act as a communal agora able to accommodate a wide range of social and cultural events such as ‘Preview In Daegu’: Daegu’s annual international textile fair, Daegu Street Motor Show, Daegu International Body painting Festival among many others.

In conventional libraries, flexibility of collections is impractical due to their separated floors. Movement of users is only possible via circulation core. In many cases, their large flat floor plates have connection to the outside only at the area along the periphery, leaving the most area inside detached from their environments. It does not encourage a sense of social collectiveness in the community, particularly in the green zone of Daegu where the coexistence between people, community and nature being encouraged.

Our proposed design strategy therefore aims to solve these problems in which it can be described in sequence: Loop-Intersection-Book Infinity Loop

By narrowing down the typical large floor plate in conventional libraries into one long strip of connected categories and then encircle in a loop shape, the flexibility of collections is enhanced due to its continuity. The expansion or contraction of any categories can be accommodated by pushing next stacks forward or previous ones backward without having to relocate the otherwise excess items to next floors. Users can also move continuously on a single platform with ease of access to the whole collections without floor changing. As a result of the narrow floor loop, where necessary the natural light can get into the reading space along the entire length of the building periphery.

In order to make the loop even more flexible and convenient for users to make the shortest way to find their items, twisting a loop into number 8 shape, flexibility of collections remains the same while users can ‘warp’ between categories at the intersection. For instance, if a patron would need to find books in category 599 and 900, he or she can finish 599 and then ‘warp’ to 900 via the intersection.

To complete full flexibility of collections and flow of users by lifting one side of the strip on top of the other, ‘Book Infinity Loop’ then emerges.

In doing so, it can prevent the overcrowding of users at the intersection while at the same time keep the main circulation flowing infinitely without interruptions. The way it works is similar to the road intersection where a fly-over is built in order to solve the congestion problem. To maintain the idea of shortcut between categories at the intersection, the floor of the upper strip is penetrated and a spiral staircase is inserted in order to reconnect vertically with the lower strip, becoming a ‘warping’ space where patrons can jump over between 4 directions among the two levels.

As a result of the infinity shape, naturally the spaces between outside (courtyards) and inside (library programs) of the building are intertwined, engendering a sense of social collectiveness among the users inside the library, the surrounding community and the city of Daegu as a whole.

The program distribution of the proposal is organized under the concept of “infinity loop = infinity learning” in which all public programs can be accessible by disabled and non-disabled alike.

Thanks to the infinity loop shape that contains all the programs along its three-dimensional trajectory, the visual interactions amongst the programs in various levels and directions, from the basement to the top floor and from one end to the others, occur in unprecedented ways.

The principle of the building’s structural system is inspired by the infinity shape. Essentially, the long strip of the loop is treated as a continuous rigid frame strengthened by the super trusses in an arched shape. This consequently allows the upper floors to be stacked upon the lower arches and cantilevered out extensively. The intricacy of the structure also articulates the concept of ‘intertwining’ between the library and the context in a dramatic way. Its coexistence with the surrounding appears as if it was loosely stitched by a string of gigantic threads, hinting the flourishing relationship between Daegu and the textile industry.

To be in line with the city’s campaign of the green buildings, particularly Solar Energy, the proposed design deploys the advanced technology of Building-integrated photovoltaic (BIPV), photovoltaic materials that are used on building facades. Photovoltaic glazing with light-diffuser translucent films are applied onto the entire surface of the Book Infinity Loop, producing energy as an ancillary source of electrical power to be used for lighting in the reading space. The translucent films also help diffuse the direct sun light and prevent glare from the outside, keeping the illumination of the interior more evenly distributed.